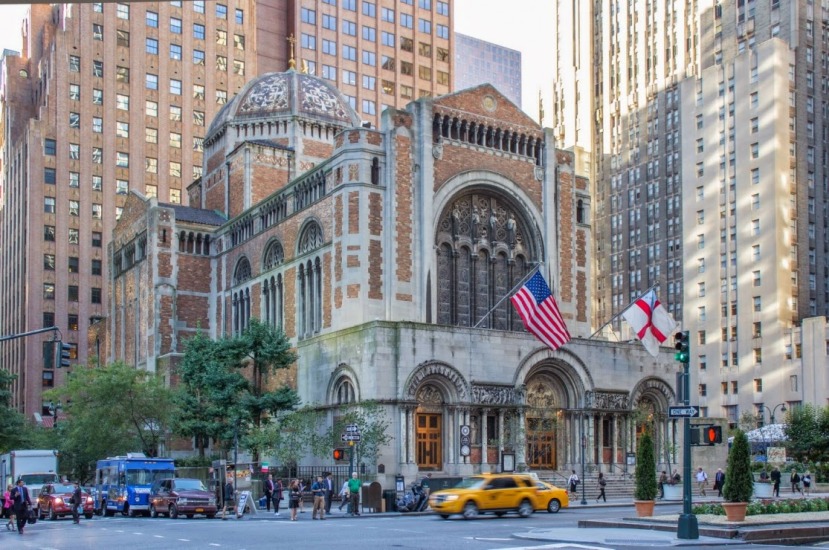 Hey guys, thanks for sticking with me through this week’s two-parter! If you haven’t read part 1, go take a look at Manhattan’s largest brewery and the first lager in America. Today we continue with our history of Park and 51st with the current structure, St. Bartholomew’s Church (St. Bart’s to his fellow New Yorkers.)

The parish of St. Bartholomew’s Episcopal Church was formed in 1835 at a meeting-house on Bowery and Broome. It’s uncertain why the congregation was named for St. Bartholomew, but it may be related to a 10-day festival held in the early days of New Amsterdam. A meeting-house in the heart of the Bowery may seem like an inauspicious start to one of the wealthiest congregations in Manhattan, and perhaps realizing the roughness of their surroundings, the parish moved to their first church on Lafayette and Great Jones a year later.

During that time, the church’s ranks swelled with New York City elite, none more so than titan of industry Cornelius Vanderbilt. After spending 43 years in a church that even the parish paper described as “very plain and destitute of architectural beauty,” St. Bart’s was determined to make an impression with their next home. In 1878, they moved to a new site at the southwest corner of 44th and Madison. They hired James Renwick as architect, who a few years earlier had designed St. Patrick’s Cathedral, and commissioned a set of portals designed by Stanford White of McKim, Mead & White, courtesy of a large donation from the Vanderbilt family.

The portals were rightly hailed as masterpieces. In a move both artistically inspired and financially prudent, White selected three different sculptors (Herbert Adams, Daniel Chester French, and Philip Martiny) to embellish the portals. This not only meant the portals could be completed in a third of the time, but it also gave each set of doors its own unique style. Per a 1904 article in House & Garden, “Seldom have the kindred arts of sculpture and architecture been more happily mated.” St. Bartholomew’s was equally devoted to other art forms. In 1905, the Rev. Leighton Parks brought a young British musician of Polish heritage to be the organist and choir director from 1905 to 1908. That musician was Leopold Stokowski. Stokowski would go on to international renown conducting the Philadelphia Orchestra, but he never forgot his first job in the United States, returning to conduct the St. Bartholomew’s Church Choir and the American Symphony Orchestra two days shy of his 90th birthday.

By the 1910s, St. Bart’s was ready to move again. For their third (and final) move, they chose the corner of 51st Street and Park Avenue, where bourgeois townhouses were rapidly replacing the factories that had existed there in years prior. In 1914, the church bought the F. & M. Schaefer Brewing Company’s factory, and broke ground on the church that stands their today in 1917. Bertram Goodhue’s designs would be a radical departure from the handsome but traditional church at 44th and Madison. His plans called for a cathedral-sized Romanesque structure with heavy Byzantine influences. Thick walls and small windows meant a wide-open nave free of columns or buttresses. This meant there would be no side aisles or chapels, giving celebrants an unfettered view of the altar. Arches were rounded rather than peaked, and the bricks were not dark brown or grey but a vibrant yellow. (Goodhue’s original design also called for an enormous spire, but that idea was scrapped in favor of the distinctive dome seen today.) Of course, some of the old architectural elements were reincorporated, most notably the Stanford White portals. And St. Bart’s wouldn’t forget its commitment to music, either. The church is home to a full-time professional choir and the largest pipe organ in New York City.