The Hole in the Wall at 279 Water Street

279 Water Street has been known by many names since it was built in 1794. It started life as a waterfront grocery run by Newell Narme. (At the time, Water Street marked the eastern edge of Manhattan, much like Beaver and Pearl before it and Front Street after.) The property changed hands many times in the 19th century, notably to attorney Charles G. Ferris, who leased the property to a host of saloons.

The most famous of these was the Hole in the Wall, owned by the aptly named One-Armed Charley Monell. Hole in the Wall was what’s known as  a “pull joint.” Rather than use glasses, a thirsty patron would pay three cents to drink as much as they could in one breath from rubber tubes connected to barrels of rotgut behind the bar. One-Armed Charley also kept a glass jar full of pickling juice next to the barrels. Waterfront brawlers would return from fights and deposit their “trophies” of severed ears, fingers, and noses into the jar.

Brawls were frequent at Hole in the Wall. Slobbery Jim and Patsy the barber were two Daybreak Boys, a gang of river pirates who sacked ships a few hours before dawn. One night, they robbed a drunken sailor of 12 cents and threw his corpse into the Hudson. They retired to the Hole in the Wall, where Jim and Patsy got into a bitter argument over the 12 cents. The argument came to blows, with Patsy landing a knife between Slobbery Jim’s ribs. Slobbery Jim kept on fighting, and after half an hour, eventually claimed victory by slicing open Patsy’s throat and crushing his skull with his hobnailed boots. Slobbery Jim fled the city and later turned up in historical records as a captain in the Confederate army.

To keep order, the Hole in the Wall kept two female bouncers, Kate Flannery and Gallus Mag. Gallus Mag was one of the most colorful characters in New York history. (Though not to be confused with Hellcat Maggie, another female gangster known for filing her teeth into points before a battle.) Mag was a vicious fighter, standing 6 feet tall, a pistol tucked into her eponymous suspenders. She proved her mettle in 1869 in a duel with Sadie the Goat, a female pirate and head of the Charlton Street Gang. Sadie’s name came from her habit of headbutting her opponents in the stomach during a fight, but Gallus Mag bested her by ripping off Sadie’s ear and depositing it in the Hole in the Wall’s pickling jar. Years later, as Sadie was retiring from a life of piracy, she gave Mag a gift of loot as a peace offering to the “Queen of the Water Front.” Mag was so touched that she pulled out a random ear from the jar and gave it to Sadie, which Sadie placed in a locket and wore around her neck for the rest of her life.

The Hole in the Wall closed in the 1840s, after a string of 17 murders in 2 months. Several other bars opened on this spot, including the Empire House (1850-1858), Tom Norton’s (1859-1881), which did double duty as a brothel, and a restaurant in the 1920s that advertised “non-alcoholic cider” but sold bootleg beer from Brooklyn outlaw Charlie Brennan. It is currently the Bridge Cafe, but according the Bridge Cafe chef Joe Kunst, Gallus Mag’s ghost may still haunt the premises, tramping with heavy footsteps when the restaurant is dark and empty. The premises have been closed since Hurricane Sandy in 2012, so who knows if it will ever re-open. Whatever happens in this space, let’s hope Gallus Mag continues to haunt her old stomping grounds in the dead of night. 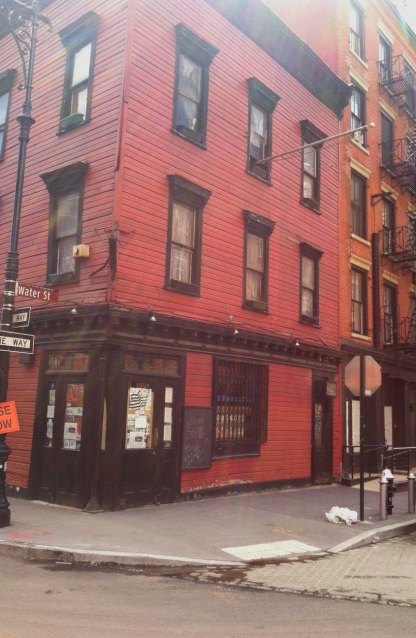