The Back Room at 102 Norfolk Street

If you want to visit one of my favorite bars in New York, head to the corner of Norfolk and Delancey near the Williamsburg Bridge. At 102 Norfolk, you’ll see a small metal gate with “LOWER EAST SIDE TOY COMPANY” spelled out in stickers. Pass through the gate and walk down the stairs through the subterranean corridor and into a dark courtyard. You should see a black metal door with toy fire trucks stacked outside. Open the door and step into the Narnia of Party-as.

This is the Back Room, a neo-speakeasy that’s been open since 2006. Softly lit by crystal chandeliers, with smoky portraits hang on velvet-lined walls, it feels like you’re in a sumptuous Jazz Age bordello. You can grab a seat at the bar, but I prefer to sink into the plush couches near the roaring fireplace. Cocktails are served out of teacups and beers out of paper bags, a throwback to the days when stocking up on champagne flutes and pint glasses would raise the eyebrows of the Dry Squad. To be fair, the drinks are a little overpriced and not as strong as the concoctions mixed up at PDT or the Raines Law Room, but as Butch Cassidy said, “small price to pay for beauty.”

Besides, the Back Room has one advantage over other New York speakeasies – it actually was a 1920s speakeasy.

It all started in 1905, when Alex Ratner and Jacob Harmatz opened a kosher dairy called Ratner’s Restaurant on Pitt Street. Also known as “milkhiks,” dairies were popular alternatives to delis in Jewish neighborhoods, skirting the kashrut ban on mixing meat and cheese by simply doing away with meat altogether, serving up vegetarian dishes like cheese blintzes, fried latkes, and matzo brei. For many of the 500,000 Jews living in New York at the time, the dairy was a godsend, and Ratner and Harmatz moved to a larger location at 138 Delancey Street in 1918. Known for fluffy pierogies, rich borscht, and ornery waiters, the new location averaged 1,200 diners for Sunday breakfasts, slinging 10,000 onion rolls a day in the process. Jacob’s sons, Harold and Fred, took over the business in 1944. The brothers, especially Harold, became pillars of the community, hosting meetings of the East Side Chamber of Commerce and fighting Robert Moses’ plan to build an elevated expressway across Delancey Street in the late 1960s.

One of Ratner’s best customers was a dapper 5-foot-tall swell with curling lips and deep-set eyes. Born Meier Suchowljansky in modern Belarus, his family immigrated to New York in 1909 and settled on the Lower East Side. From humble beginnings as a tool-and-die mechanic camoflauging stolen cars, he became the head of America’s largest crime syndicate with nearly $300 million sunk in Swiss bank accounts. We know him as Meyer Lansky, the “Mob’s Accountant.”

In the 1920s, Lansky joined forces with childhood friends “Bugsy” Siegel and Salvatore “Lucky” Luciano to get into the bootlegging business. For their base of operations, Lansky chose a speakeasy hidden behind Ratner’s dairy. The Back Room was an ideal spot for a speakeasy. 138 Delancey stood on top of a warren of tunnels and alleys connecting it to neighboring buildings. The main bar had exits on Suffolk, Norfolk, and Delancey Street, and four more led out of the VIP room hidden behind a revolving bookcase. One of these exits may have led straight into Ratner’s kitchen. Lansky could often be found talking shop with Lucky and Bugsy, a brace of bodyguards on either side. Waiters knew to come only when beckoned – no one wanted to be caught eavesdropping.

Together, they formed a hybrid Jewish-Italian mob that would change organized crime in America forever. In 1931, Lansky and Luciano orchestrated the murders of New York’s top mafiosi, Joe Masseria and Salvatore Maranzano. Lansky’s gang was now the most powerful criminal organization in the country. Joining forces with their counterparts in Brooklyn, Boston, and Philadelphia, they formed a national crime syndicate “bigger than US Steel.” Members voted on hits the way corporate board members voted on reading the minutes. They called it “the Combination.” Newspapers called it “Murder Incorporated.”

After World War II, Ratner’s star began to fall. Jews fled the Lower East Side for greener pastures in the outer boroughs, and Puerto Ricans moved in, leaving only a few neighborhood die-hards to keep the business above water. By the 1990s, Ratner’s would again have to adapt to a wave of young artsy gentrifiers who weren’t particularly interested in matzo brie and whitefish.

In an attempt to cash in on the new neighbors, Ratner’s doomed itself with two poorly-executed tactics. First, they opened a trendy steakhouse called Lansky’s Lounge in the old speakeasy. Second, in a move that pleased no one, the kosher dairy threw tradition to the wind and switched to “kosher-style” cuisine. Gazpacho, sashimi, cheeseburgers, and lobster all found their way on the menu in a futile attempt to attract a younger, hipper clientele.

The move was a resounding failure. Gentrifiers still avoided the dairy while offended old-timers abandoned the restaurant in droves. Ratner’s closed its doors in 2002, and the Lansky Lounge followed suit a few years later. “Our business used to be 99 percent Jewish people, but the neighborhood is changing,” sighed Fred.

He’s right, but that doesn’t mean it’s been forgotten. The Back Room shows that there’s still a lot of love for the rich, tumultuous history of the Lower East Side. 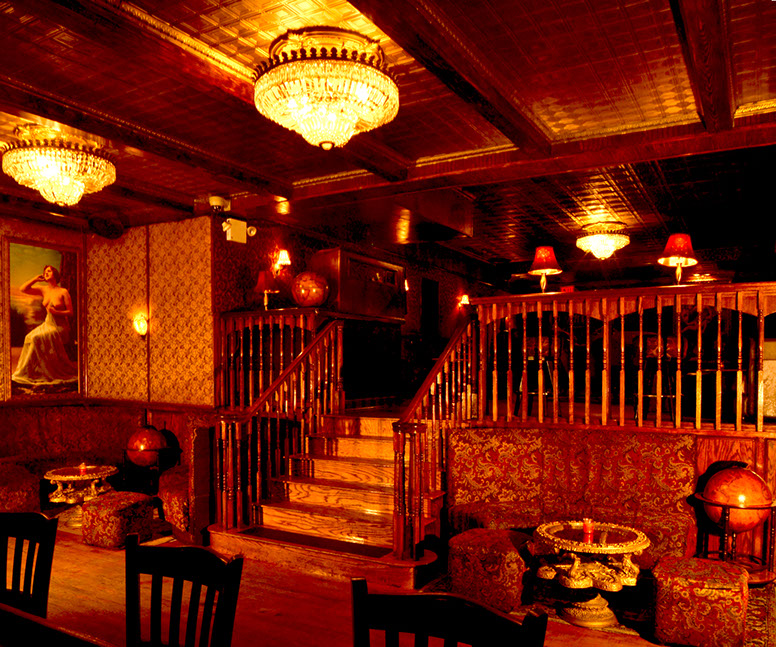 Tagged as: Featured, Lower East Side