Tucked between a barber shop and a dry cleaners on the eastern fringes of Chinatown, you could walk right past this squat two-story house without giving it a second glance. But if you look above the prefab siding, you might notice the old brickwork and 19th-century dormers on the second floor. Dig a little deeper, and you’ll discover the building is at least 160 years old, hosting one of the seediest dives in New York history.

In early 1850s, this was J. Marriot’s Sportsman’s Hall, a saloon and gambling den where toughs, dandies, and merchants alike could enjoy “chicken controversies, dog fights, and rat-killing matches.” Like the scene at Kit Burns’ Rat Pit a few blocks away, dogs were pitted against sacks full of seething rodents as spectators placed bets on how many rats the canines could kill in a set amount of time. The owner of the fastest dog won a $100 purse. This task is harder than it sounds; New York City brown rats (Rattus norvegicus) are particularly vicious, hissing and snapping when cornered and capable of leaping two feet vertically and three feet horizontally.

Rat-baiting may seem vulgar and violent to us (mostly because, well, it is), but to many New Yorkers of the 19th century, it was as natural as Monday Night Football. Newspapers like the New York Clipper and the Brooklyn Eagle listed dog fights, complete with start times and minimum stakes, alongside baseball games and billiards exhibitions.

In the late 1850s, Marriot sold the dive to an English gangster named Harry Jennings, who built a veritable dog-fighting franchise on the Lower East Side. He ran gambling hells at 49 Madison, 114 Madison, and 22 White Street. His brother Jack supplied the vermin, catching rats by hand and selling them to the pits for 15 cents a rat (if demand was low, he turned the excess into cheap gloves.) To add variety, he brought in pigs, badgers, raccoons, even bears, with a silver collar given to the dog “that runs at the bear the gamest.” Jennings himself owned 21 championship bulldogs, including Rose, Jack, Topsy, Benny, and the celebrated Lady Suffolk who dispatched a whopping 100 rats in 8 minutes and 23 seconds. The Sacramento Daily Union describes the scene:

“At eight o’ clock the amphitheater was filled with a most motley assemblage — well dressed individuals, seedy looking gents, firemen, sporting gentlemen, amateur dog fanciers and professional dog fanciers making a sum total of about three hundred spectators…Her activity, spunk and untiring perseverance was truly wonderful, and excited immense applause from the habitues of the pit.”

Not everyone was so entertained. In 1859, a disgruntled rat catcher shot Jennings twice, point-blank, with a double-barreled pistol. The first ball hit Jennings’ collar-bone, producing “a slight wound,” but the second hit his upraised left hand with such force that it shattered the bones and left him crippled for the rest of his life. 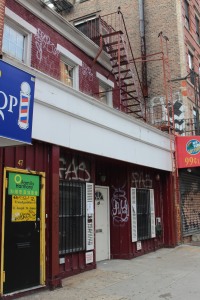 In 1869, Jennings was arrested for the 1866 burgling of a Boston broker’s safe and sentenced to four years’ in the Massachusetts State Penitentiary. When he got out, rat-baiting had largely fallen out of fashion for the tamer pleasures of whist, faro, and policy. According to an obituary in the Fanciers’ Journal, Jennings went into the extermination business, where he “took contracts to rid hotels and other large buildings of rats,” including Delmonico’s, the Plaza Hotel. Jennings died a respectable businessman in 1891, prompting an admiring editorialist to write “While not employing a very excited social position in the city, there were few more useful men than Harry Jennings.”

For many years, 47-49 Madison was at the heart of New York’s Greek community, centered around Madison and Cherry. It was an undertaker’s office in the early 1900s and and a grocery store in the 1960s. Today, Harry Jennings’ Rat Pit is ostensibly the office of an intergenerational counseling group called Family Harmony, though you wouldn’t know it from the exterior.

If you want to learn more about Chinatown, contact me about scheduling a Lowdown on Chinatown tour! 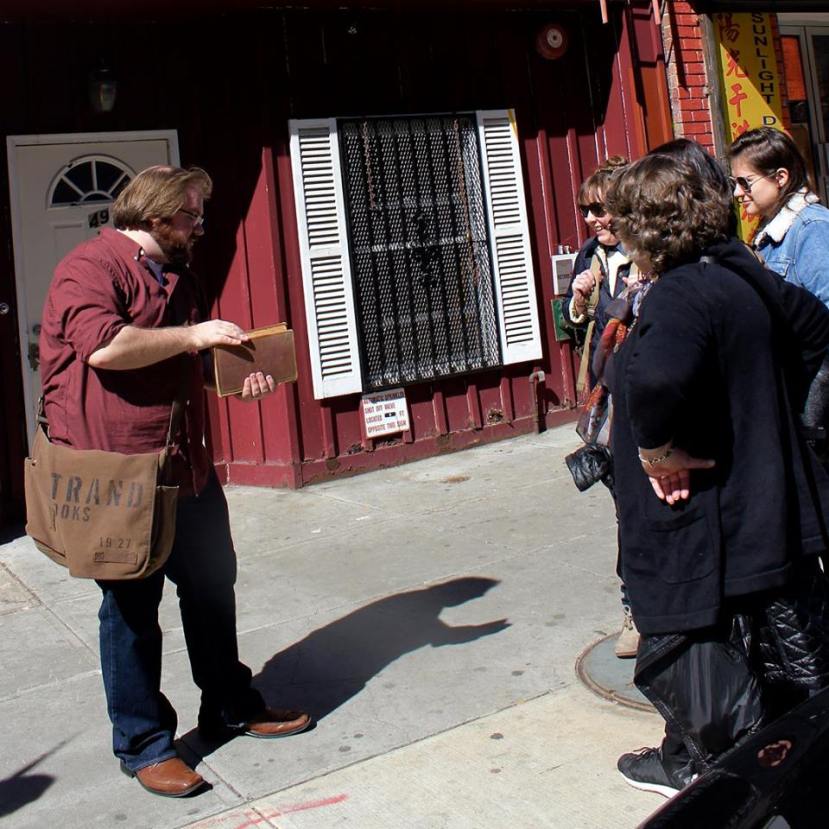